The Calderon Vega Family
Felipe is the boy on the upper right.
Source: http://fotos.eluniversal.com.mx/fotogaleria/img.html?i=1&t=6&g=2386 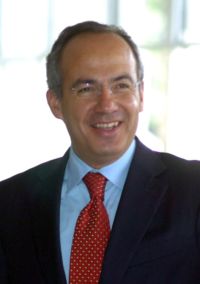 1.    Felipe Calderón won by a very narrow margin over chief rival, Andrés Manuel López Obrador. Neither enjoyed a majority of votes, however. Who represents the majority depends upon which of the frontrunners, Calderón Hinojosa or López Obrador, would have gotten the votes of the PRI candidate, Roberto Madrazo. In all probability, the PRI votes would have split between the two but we cannot know. Under the system Mexico uses, Calderón Hinojosa won.
2. An example of Mexican government tactics was an incident that happened to Kenneth F. Johnson, a political scientist at the University of Missouri—St. Louis, author of Mexican Democracy: A Critical View (1971, 1984) among other books. During an August, 1972 research trip, he  had borrowed a car from another US political scientist, Robert Bezdek, and gone with Calderón Vega to Morelia, Michoacán. When Johnson did not return with the car on the expected day, Bezdek assumed the two had stayed an extra day in Morelia. But called the Hotel Gillow in Mexico City the following day and was told that Johnson had checked out. Bezdek realized that Johnson would not have left with his wife and daughter without contacting him, that something was wrong. He then called  Calderón Vega and learned that Johnson had dropped Luis off the day before. Calderón Vega, through whatever means, discovered that Johnson and family had been arrested because Johnson had criticized the Mexican government in a Mexican periodical. The government was having its own problems with insurgents and nervous government agents overreacted, even threatening to kill his four-month-old daughter by dropping her from a window in a multi-story building. Johnson was not involved in anything nefarious, however, other than pointing out the the Mexican government was a dictatorship. He was fortunate because Bezdek got the US Embassy involved and the Johnsons were released. They were expelled from the country. President Luis Echeverría later sent his apologies. Bezdek is writing an article about this incident and the late Ken Johnson.
3. PAN members are known as panistas.