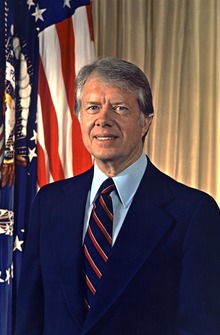 James Earl Carter, Jr, born October 1, 1924 in the tiny town of Plains, Georgia, was an unlikely person to come President of the United States. He was only the third Southerner to be president in the 20th century.(1) He was a "born again Christian" and vocal about his beliefs. He was trained as a nuclear engineer at the US Naval Academy. At the time he was elected, he had held no public office for years, having been governor of Georgia from 1970-74.

The family supported itself from peanuts, both growing and processing them. So he could claim to understand the problems of both farmers and businessmen.

He campaigned for two years (1974-76) and slowly garnered enough support to get the Democratic nomination in 1976. He was a Washington outsider and thus not responsible for what had been happening there. Unlike President Gerald Ford, he was not part of the disgraced Nixon administration nor the problematical Ford administration which presided over a severe recession in 1973-74 and unemployment of almost 9%. Carter won with 505 of the vote or 297 Electoral college votes to Ford's 241. The electorate was clearly divided.

As president, he could not get Congress to pass his proposals for tax, welfare, and civil service reforms even though they were technically sound. Nor could he gets bills passed creating a consumer protection agency or means to contain rising hospital costs. Being an outsider might have been an advantage in getting elected when much of the population was disgusted with the Washington establishment but it meant that he did not know how to get things done. And bills are passed through politics, through wheeling and dealing, not because they are technically sound. Some sais his problem was that he approached problems as an engineer.

He did accomplish some things. The Departments of Energy sand Education were created, the former prompted by the energy crisis created in 1973-74 by the decision of OPEC to double petroleum prices and then double them again. His energy bill, however, was killed by the oil and gas lobby who, naturally, wanted as few restrictions on their activities as possible. Carter did cut some costly congressional pork barrel bills for dam and water projects but this cut his support in Congress because it made it more difficult to "buy" votes.

The economy continued to be a problem. Automobile prices increased 72% between 1973 and 1979. New house prices went up 67%. In 1979, because the Iranian Revolution interrupted that nation's production of petroleum, gasoline prices increased 60%. The inflation rate went from 6.8% in 1977 to 7.6 % in 1978 to 11.5% in 12.4% in 1980. High unemployment continued. Investment, savings, and productivity declined. Carter advocated and got the deregulation of many businesses and industries but these measures had no apparent immediate impact. Although presidents have a very limited impact on the economy, they are blamed for bad economic times. Carter was.

Foreign policy, over which he had more control, would be his downfall. He opposed the Soviet invasion of Afghanistan in 1979 and aided those who resisted. He refused to allow the US to participate in the 1980 Olympics in Moscow, a move that cost him politically. He normalized relations with China. With the Camp David Accords of 1978 he brought peace between Egypt and Israel, no mean feat. For years, Republicans and Democrats alike has been negotiating with the Republic of Panamá concerning the disposition of the Canal Zone and the Canal.(2) Conservative to reactionary Iranians, led by fundamentalist religious leaders overthrew the Shah of Iran, who had very close ties to the US, in order to establish what they considered to be a godly republic, one which rejected Western social mores. In November, 1979, a group with government backing seized the US embassy in Teheran and held numerous people hostage. When he sent the US military in May, 1980 to try to rescue them, the military failed. He continued to negotiate and finally obtained the release of the 52 people but the Iranian government, in an effort to get at Carter, released them on the day Ronald Reagan was inaugurated.

Carter's reputation as a citizen has fared better than his reputation as a president. Carter was conservative except in matters of race. He believed then and still believes that a person should be judged on their individual worth. He has been an active proponent of peaceful solutions to world problems. He has been active in Habitat for Humanity, wielding a hammer like everyone else's.

(1)Woodrow Wilson was born in Virginia and raised in Virginia and Georgia. Most of his higher education was obtained in Southern institutions although he received his undergraduate education from Princeton university. Lyndon Baines Johnson was considered a Southerner because the part of Texas in which he was raised was considered Southern at the time and he belonged to the Southern wing of the Democratic Party. In the late 1950s and early 1960s, he tried to get people to consider him a Westerner.

(2)Many people in the US, including Ronald Reagan, have had the mistaken idea that the Canal Zone and the Canal belonged to the US. Every time the issue was adjudicated, US courts held that the Zone was Panamanian territory; the US was just leasing the space. The original treaty said that the US could treat the Zone as if it were sovereign. One could treat Ronald Reagan as if he were a vegetable but, of course, it would not make him one. A new treaty was needed because the Canal was becoming obsolete for US ships.